OAKLAND HAD TWO MEN ON THE BENNINGTON

One, Heman A. Kimball Survives,
While the Other, D. C. Archer is
Among the First to Die.

Oakland had two representatives on the ill-fated gunboat Bennington, in the boilers of which blew up with such deadly effect in San Diego, Friday last.*

One of these was Heman Augustus Kimball Jr., an apprentice, who has just passed his twentieth year and whose parents reside in the Blake House at the northeast corner of Clay and Eleventh streets. Young Kimball escaped with his life thought some hours elapsed before this grateful intelligence was brought to his parents, the suspense in the meantime causing them great anguish.*

The other blue jacket from this city was Don Cameron Archer, Seaman, who had attained only his nineteenth year. He however, was not so fortunate as was Kimball because he lost his life. He was one of the poor fellows who were badly scalded and was among the first to die. His remains were interred in the cemetery at Point Loma yesterday. *

Archer had not resided long in this city. As a consequence, he was not particularly well known, the most of his acquaintances being in West Oakland, where his guardian, David Slattery, resides.*

Don Cameron Archer was one of 66 crew members killed in one of the Navy’s worst peacetime disasters, when the U.S.S. Bennington boiler exploded on July 21, 1905.

19 years old at the time of his death. He is buried at the Fort Rosecrans National Cemetery in San Diego, California. Plot BM, 10 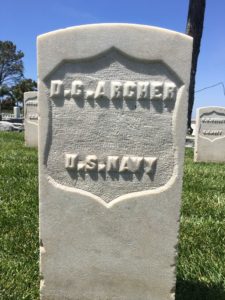