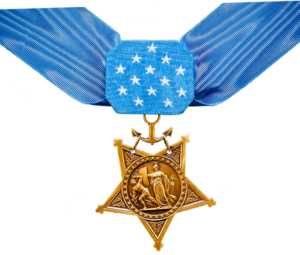 The original Medal of Honor was designed for the Navy. The design included an inverted, five-pointed star with a cluster of laurel leaves that signify victory, mixed with oak that represents strength, on each of the star’s five points. The design featured Minerva, Goddess of Wisdom and War, and a man clutching snakes in his hand, representing discord, who is recoiling from Minerva. The original red, white and blue ribbon was replaced with a blue silk ribbon bearing 13 stars, symbolic of the 13 colonies. The Navy, Army and Air Force Medals now all hang from this same blue silk ribbon.

In the disaster of the U.S.S. Bennington on July 21, 1905, 11 men emerged as Medal of Honor recipients, for their acts of valor. The men are as follows: