Growing up in Clarinda Iowa as a young man he took after his father in the newspaper business. He worked for 6 years at the Clarinda Journal in the printing business. It came as a great shock to the personnel at the Journal of his death. During his time at the Journal he married Stella Keller Barchus and had a young daughter, Daisy Helen Barchus. He was father to Daisy Helen Barchus born 7 December 1901 in Clarinda, Page, Kansas.

In November 1904, he and his brother Clarence, enlisted in the Navy. John Calvin served as a seaman aboard the U.S.S. Bennington.

On July 21, 1905, the ship’s boiler room exploded. “The cause of the accident as reported by Commander Young was due to a small leak in boiler “B” which forced liquid into contact with boiler “D” and caused both to explode almost simultaneously. At once the vessel was filled with scalding steam and ashes, causing many who were not blown over-board to jump overboard for air, and the commander thinks that in this way a good many were drowned.”**

There are two theories surrounding the circumstances of John Calvin’s death. The first one, is that he was bathing and heard and explosion. “Hurrying from his room, he saw a friend, a young apprentice, whom he quickly seized and threw through a port hole into the water, saving his friend’s life. A second explosion occurred which prevented him from saving himself” * and he later died from being badly burned.

The other theory is that “while on the streets . . . he heard a terrible explosion from the harbor but thought nothing of it until a few moments later the terrible news reached him of the havoc that befel [sic] his vessel. Reaching the scene he did everything possible to relieve the distressed soldiers and officers who had been hurled into the water or jumped overboard to escape the burning steam and fire from the three exploded boilers. . .

John’s 18 year old brother Clarence Barchus, also a soldier sailor boy with him, but who escaped with a slight scald on the foot, was given a furlough to accompany the remains home, and arrived Monday morning and thus his safety and presence added much comfort to the parents and family. John was a young man of steady habits and good disposition, and his record as a soldier boy in the navy was among the best.” **

John Calvin was 22 years old when he died and was buried at Clarinda Cemetery in Clarinda, Page County, Iowa. 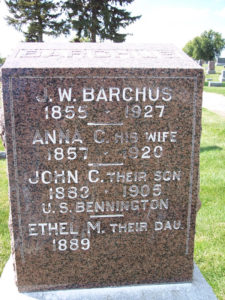