Amel Bensel was born in Bromberg, Preussen in February 1884. He was the son of August Ferdinand and Matilda Johanna Meyer Bensel. His family immigrated to the United States in March 1890. He enlisted in the United States Navy around 1904, and served as a Fireman Second Class aboard the USS Bennington (PG-4).

He was killed on July 21, 1905 at 21 when excessive steam pressure resulted in a boiler explosion and sprayed scolding steam through the ship’s living compartment. He was one of 66 crew members killed in one of the Navy’s worst peacetime disasters. 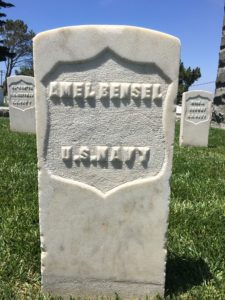