In 1900, when Clive was 18 years old, he was living at home with his family in Des Moines, Iowa and was working as a salesman for a dry goods store; he went to visit his brother in Fresno, California and decided to join the navy.

In approximately 1903, he enlisted in the Navy and was first stationed on the U.S.S. Mohegin and later transferred to the U.S.S. Bennington as gunman.**

Clive died at the age of 23 from an explosion on the Navy’s U.S.S. Bennington ship when it was docked in San Diego, California. The ship was launched in 1890 and served in the Spanish American War and throughout the Pacific looking after America’s interests. The ship suffered a boiler explosion on July 21, 1905 that ended up killing 66 men and injured nearly everyone else on board. *

Although he initially survived the blast he later died at a hospital in San Diego. As soon as he received word of his injuries, his brother, John Brockman of Fresno, CA, quickly traveled to San Diego and was at his side when he passed. ***

Clive is buried with his younger brother, Walter Clayton Brockman, who died in 1893 at only 20 months old. He is buried at Woodlands Cemetery, Des Moines, Polk County, Iowa. After Clive died, his parents and brothers moved to California. 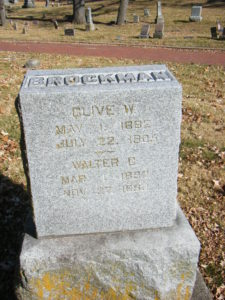