It was reported in the Denver Rocky Mountain News on Sunday July 23, 1905 that Robert B. Carr, or “Bobby” as he was known by most people in the Downtown area of Denver, was one of the crew of the ill-fated USS Bennington that blew up in the San Diego, California harbor in one of the worst maritime disasters since the USS Maine.

Up until January of 1905 Bobby Carr, who at that time was 16, had been employed for two years by the Postal Telegraph Company (pictured above). On the 1900 Census living in Toledo, he is listed as 11 years old, born October 1888 in Ohio. After his father’s death, with 5 young children to raise, Bobby’s mother sent him to Denver when he was 14, to live with her sister and her husband.  Thinking that with a man in the household he could keep a close reign on Bobby. While in Denver Bobby lived with his Aunt and Uncle, Mr. & Mrs. Archibald Howard and Carrie (Darling) Elton, while his mother Mrs. Mary (Darling) Carr (widowed) lives in Toledo, Ohio with his two younger brothers and two younger sisters. Archie was employed as a Lineman and Troubleshooter for the railways.

Bobby Carr was first assigned and served on the USS Pensacola which was followed by his service on the USS Independence. In June he was transferred to the USS Bennington. He was determined to become a midshipman.

His mother sent him to live with her sister, of Denver Colorado, when he was 14 as he was a handful and there was a man in her sister’s household. His mother stated that he was mischievous but a good boy in spite of that! It is reported that the signature that was needed for his joining the service was “spurious” (not valid) as it was purported to be.

Bobby’s father, Robert B. Carr, was born in Pennsylvania and died 1899 in Ohio and his vocation was that of a Printer. In the 1900 Census Bobby is listed as 11 years old attending school and living with his mother (and survived by) Mary A. (Darling) Carr born January 1865 along with his brothers and sisters; James Darling Carr – 10, Bessie M Carr – 8, George Wentworth Carr – 6, and Jessie A. Carr 3. Bobby was also survived by his Aunt and Uncle Mr. & Mrs. A. H. Elton of Denver Colorado.

Robert “Bobby” Carr was a descendant of Nathaniel Chittenden, Pvt. of Connecticut where he fought in the Revolutionary War under the command of Capt. Ephraim Chamberland and Col. Heman Swift. 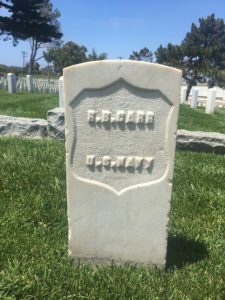