“Mathew Chambers, a young man formerly of Lewiston and a popular high school student, was among those who met death in the Bennington disaster at San Diego, Chambers was a seaman on the boat and the news of his death reached here yesterday when a telegram addressed to his mother, conveying the sad news, was received. His mother resides at Cloverland in Asotin county and the Western Union last night sent a special messenger to carry the dispatch to her.

Young Chambers entered the naval service in 1902, shipping as a seaman. When he decided to enter the navy he was a student of the Lewiston high school and had reached the year of graduation. He was recognized by his instructors and by his fellow students as being one of the brightest boys who had ever entered the school. Upon entering the navy he had worked industriously and there was bright promise for him to receive a promotion to ensign during the present year.

Young Chambers was about twenty-one years of age. He was the son of Mr. and Mrs. Mathew Chambers, who resided in the Waha section for many years. Mr. Chambers died about ten years ago and the family later moved to Lewiston, establishing a home here. Mathews and his brother, Zegede, were both high school students and both entered the navy at the same time. Mathew has two other brothers, Frank and Charles, who are residents of the city. Zebede is still in the navy and is now supposed to be in Alaskan waters. Mrs. Chambers a few years ago married Jack Bowman and is now residing at Cloverland. Officer David Gentry, of the city police force, is a friend of the family and when the message was received yesterday announcing Mathews’ death, he arranged to have a special messenger sent to Cloverland to notify the mother. Until the latter’s wishes in the matter are know, the remains of the boy will be held at San Diego and the funeral arrangements will await her instructions.”

Matthew G. Chambers was 23 years old when he died and was from Lewiston, Idaho. He is buried at the Fort Rosecrans National Cemetery in Point Loma, California in the Bennington Monument. 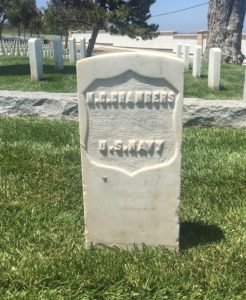