William Cherry was born on September 27, 1881. He was a Coal Passer on the U.S.S. Bennington. Coal Passers were once called Coal Heavers that came into service in 1842 and hauled coal from a ship’s bunker to the boiler furnaces. A coal heaver could make up to 50 trips a day with a full bucket weighing about 140 pounds. Since it was hot, dirty and dangerous work, the members of the “black gang” received substantially higher pay than other sailors. In 1893, the rating was changed to the less strenuous sounding (but probably equally backbreaking and dirty) coal passer. 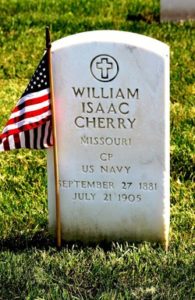