Walter Grant Served as a Coal Passer aboard the U.S.S. Bennington (PG-4).

“There is no longer any doubt that the Walter Grant killed on the U.S.S. Bennington at San Diego, was Gilbert Walter Grant, eldest son of Mr. and Mrs. Gilbert L. Grant of Overlook, near Soquel. It appears that he enlisted at the Naval Recruiting Station in San Francisco on July 6th and was one of the draft of men that reached the ill-fated Bennington the day before the accident.

He had spent a month’s vacation at his parents’ home and left Santa Cruz June 28th, expecting to spend a week or so in San Francisco and at other points, and then return to Kernville, where he held a good position with the Edison Co. When leaving he told the members of his family not to look for a letter until he reached Kernville. What caused him to make the fatal change in his plans is a mystery to his family. He had never expressed any desire to enter the navy, and when a younger brother thought favorably of it. Walter urged strongly against it. The only explanation suggested is that he may have met some of his old Chicago friends who were about to enlist and that he was persuaded to join them.

His father was on an eastern trip at the time of the accident, and not till he reached Chicago was his attention called to the name Walter Grant in the list of the Bennington dead. He at first considered it to be merely a curious similarity of names, feeling positive that by no possibility could his son have been on the Bennington or even in San Diego, but when he was later shown a more complete list in which his own name appeared as next of kin, he began an investigation the result of which indicated that it really was his son. Though there were still doubts that left hope. Leaving his Chicago business uncompleted he stated at one on the return trip, and continuing the investigation here, one by one the doubts that held out hope were removed, the missing links in the young man’s movements being gradually supplied until the chain was sadly complete.

Gilbert Walter Grant was born in Chicago, IL., and was 21 years, 3 months and 11 days of age at the time of his death. When the family resided in Chicago he was a member of the First Regiment, Illinois National Guard, and he had a host of friends in this organization, members of which he was frequently meeting on the Coast. It is thought that some one or more of these may have been instrumental in inducing him to join the navy with them, as several of the crew gave Chicago as their home.

In view of the fact that his mortal remains have been laid to rest with military honors among his companions who gave their lives in the service of their country, and feeling certain it would be his wish, his family have decided to allow him to sleep undisturbed in this sacred ground, which will always be protected by the National Government, and be revered by all Americans.” 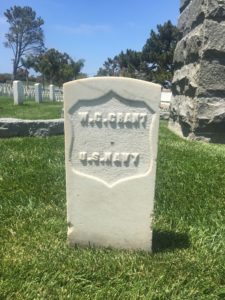