Charles Joseph Kuntz was born on March 1885, in Montana USA. He was enlisted in the US Navy at Saint Louis Missouri on September 10, 1903. His job was a Coal Passer, their main jobs was to keep the boilers fired up.

Charles was the son of Antone Kuntz born in Bliesbruck France and Margaret Leith born in Virginia City Montana, both residing in Saint Louis Missouri at the time of his death. He had two brothers John Clifford Kuntz and Clyde Antone Kuntz. They were killed while piloting a military aircraft in Hawaii in 1929.

Charles Kuntz was 20 years old when he dies and was buried in the Fort Rosecrans Nation Cemetery in Point Loma California in the Military Memorial of the Gunboat Bennington, Plot: Post 47. 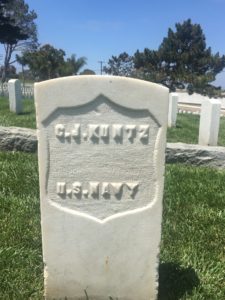