Fireman First Class John McKone was one of 66 crew members killed in one of the Navy’s worst peacetime disasters, when the U.S.S. Bennington boiler exploded on July 21, 1905.

“A McKay returned home from Detroit Saturday night – – The remains of the late John McKone, who was killed in the Bennington disaster at San Diego, California, arrived here Tuesday, and the funeral will be held at the home of Chas McKone, Sunday at ten o’clock a m…”*

John McKone was 23 years old when he died. He is buried at the Elmwood Cemetery in New Lathrop in Michigan. 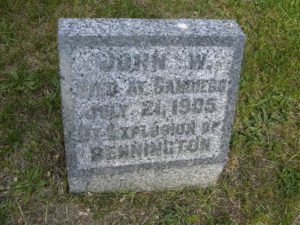