SAN DIEGO Aug. 8.-The sixty-sixth name has been added to the list of fatalities due to the explosion of the gunboat Bennington in San Diego harbor July 21.*

Frederick J. Muller died this morning at the Barracks hospital, where a score of is comrades are still confined as a result of their injuries. Mueller was 41 years of age, was chief sail maker’s mate and enlisted last at San Francisco. He was terribly burned about the head, neck, arms and hands, but though his wounds have been healing satisfactorily, little hope of his recovery has been entertained at any time. His death was directly due to ulcer of the stomach, a secondary complication. All day yesterday he grew worse and a surgeon and nurse were with him constantly last night. *

It is believed no further deaths will occur among the victims. Arrangements are being made for transferring the rest of the injured to Mare Island hospital where skin grafting will be performed upon several of them.* 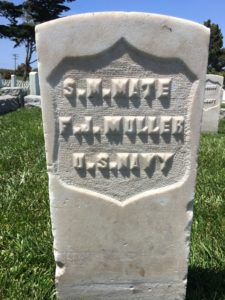