Edwin Burton was born on January 11, 1882 in California. He was an Ordinary Seaman on the USS Bennington. He was one of 66 crew members killed in one of the Navy’s worst peacetime disasters, when the U.S.S. Bennington boiler exploded on July 21, 1905. Edwin was 23 years old when he died.

“IS BURIED WITH FULL NAVAL HONORS.
E. B. Robinson, an Oakland Boy,
One of the Bennington Victims.

Vallejo, August 17. – The funeral of E. B. Robinson, a victim of the Bennington explosion, who was a son of Mrs. Emma Robinson of Oakland, was conducted at St. Peter’s Chapel. Mare is and, this afternoon with full naval honors. Chaplain McAllister officiated.
All the officers at the yard attended. The pall0bearers were sailors from the Independence, headed by Lieutenant G. W. Browne and the Mare Island Band. The sailors from the Solace, Lawton, Wyoming and torpedo boats attended the ceremonies. The coffin was covered with a wealth of floral tokens.”* 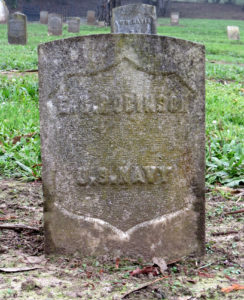