“The death toll was increased by two today. Capt. Drake telegraphed that S. Takata, a wardroom cook, died at 4 o’clock this morning, and W. N. Kennedy, a coal passer, yesterday afternoon. This brings the total number of deaths up to sixty-one. Kennedy’s nearest relative is his father, Lewis Kennedy, now living at Alliance, Neb. Takata’s next of kin is S. Takata of Tokio, Japan.” *

Sago Takata was a Wardroom Cook on the USS Bennington. He was one of 66 crew members killed in one of the Navy’s worst peacetime disasters, when the U.S.S. Bennington boiler exploded on July 21, 1905.
Sago Takata is buried in the Fort Rosecrans National Cemetery in Point Loma, California in plot BM, 48. ** 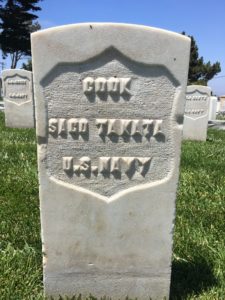