ATLANTAN ON BENNINGTON.
Wesley M. Taylor, of This City,
Was Among Those Killed by Explosion.

Among the gunboat Bennington’s dead, is Wesley M. Taylor formerly of Atlanta. He was scalded to death when the boilers of the ill-fated vessel exploded in the harbor at San Diego, Cal.

The deceased was a son of Thomas M. Taylor, of 165 Gilmer street, and was a brother of Mrs. Evelyn T. Behenna of 41 North Moore street.

Wesley M. Taylor was about 28 years of age, and was born and reared in Atlanta. He had been a member of the navy nearly ten years.

A peculiar coincidence in common with the death of Mr. Taylor is the fact that Thomas M. Taylor Jr., a younger brother of the deceased escaped from death, very narrowly about two years ago, while serving in the navy. The vessel on which he was serving was in the harbor at Santa Barbara, when the anchor chain broke, and he was caught under its coils. He was partially disabled for life by the accident. * 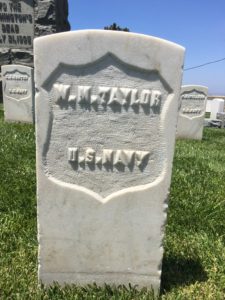